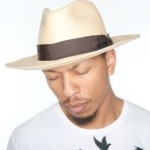 Atiim Chenzira is back at it with leading a band of creatives, but this time instead of strictly music he pulls from both is band leadership and his grass roots arts leadership. He assembled colleagues from both California and Maine to help bring the lyricism to life in his newest seven part art piece titled ‘Destiny Manifest’.

The invitation to perform an edgy historically based work was extended by both Portland Ovations & Indigo Arts Alliance, two arts organizations who frequently partner and focus on very different aspects of arts. PO focuses on Broadway Musical, Classical and Modern Dance, World Music and other cutting edge performance arts, and IAA focuses on fine arts and artist development in the African Diaspora to support people of African ancestry and of color emerge to see, experience and reach their full potential.

These two Maine based arts organizations were invited by the Kennedy Center to curate Maine based artists and produce a performance that would highlight Maine’s voices in a program titled ‘Arts Across America ‘, a program to uplift artists and showcase art from communities and regions across the country. Portland Ovations and Indigo Arts Alliance are calling their part of this 50 state series ‘Sacred Resonance’. This is a part of the Washington, D.C.-based John F. Kennedy Center for the Performing Arts Social Impact Initiatives. This free online programming will be available on Facebook Live, YouTube, and the Kennedy Center website.

Destiny Manifest: In Pursuit of Happiness